Since 2018 we express our fun and experience in a video blog (i.e. Vlog) in stead of a written report. 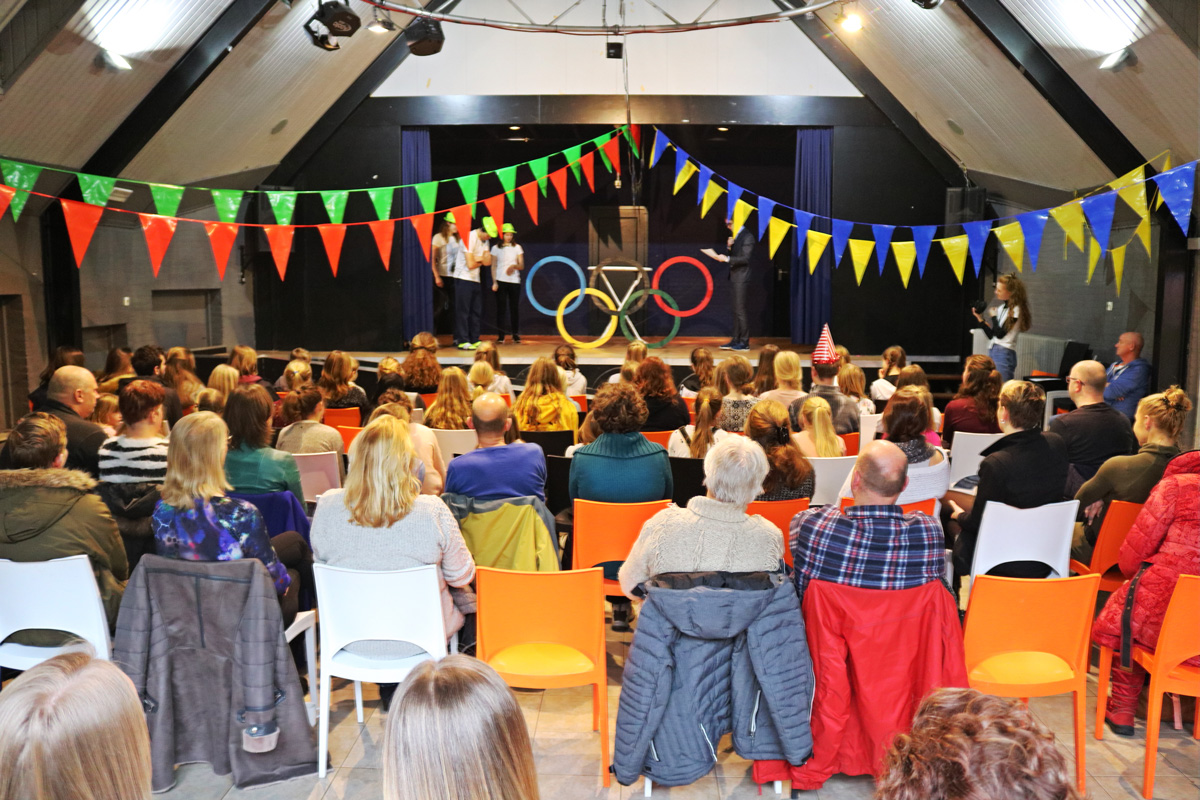 The Olympic games are officially opened (at least here in Holland) and that’s reflected in the activities as well. The participants are acting like real top athletes to perform in top condition.

The oath of both the athletes and the volunteers (attached in Attachment I and II) are checked and verified strictly. Hence, no sight of candies yet and everything is neat and tight. I think I’m lucky though, cause I didn’t check the rooms. Afraid of what I’ll find there… Fortunately, the four event managers are doing a good job watching everything.

After the opening, the younger kids joined the coaches in the gym. After some extra introduction they started their training to work on their best form. I have seen some amazing single rope skills already!
During the sport hall activities, the older participants start a nerve-racking camp game: Wie is de Mol (literally translated to: Who is the Mole). During the game, candidates have to complete assignments by which they can earn money. However, one of the group members is the Mole. The Mole’s goal is to make the assignments fail and keep the amount of money earned as low as possible. The other candidates don’t know who the Mole is, and need to unmask him or her.

The kitchen curling team also achieved an amazing performance. Pasta in different shapes and savours. Even for the vegetarians, and the ones who just like vegetables, a special sauce. And don’t forget about vla! No Dutch camp without vla!
After diner, all participants played some relaxing get-to-know-each-other games. Our event managers thought about a couple of different games so everyone is getting more familiar with each other. Cosy if you ask me. Well, cosy… It was the calm before the storm as we can see in this movie:

But lets get serious, because while the younger kids are off to bed the others are getting ready for The Test. The infamous Wie is de Mol test…

To be honest… I’m one of the worlds luckiest guys again. Not only because it exceeds my expectation, but also because of the people I’m allowed to work with and our participants. Thank you genuinely!

Hitherto, till next time!

I promise solemnly in name of all participants that:
I will earn as many points as possible. I will cheat where ever necessary and disable opponents if possible.
I will do everything in my power to great a good camp environment. To accomplish this, I will go to bed as late as possible, eat candy as much as possible and make a mess whenever I can. But most of all, ignore the event managers and other staff members.
During the closure I will be tired but satisfied en receive a present because.

In name of all coaches, facility services, press, security and other volunteers, I promise solemnly that:
All participants will be treated with respect. We expect the same respect in return. Cheating will not be tolerated, let alone disabling opponents.
To maintain the perfect energy level, all participants should go to bed in time. Moreover and in the same scope, candies are not allowed.
Last, but not least. We, the volunteers, promise that all participants will go home in superior condition and receive a present for their effort. 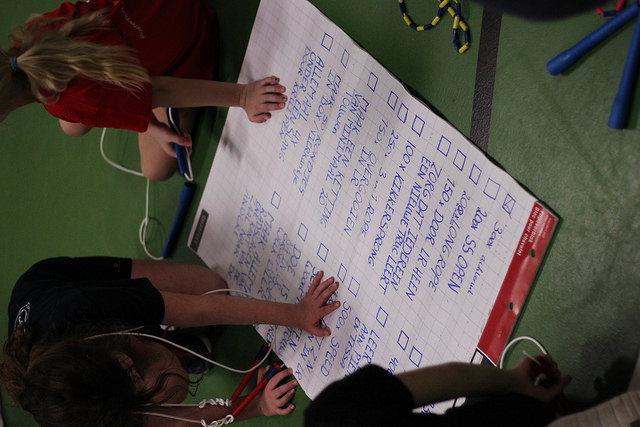 It is nice to wake up with a riddle. Curious which one, check out this Dutch song: https://www.youtube.com/watch?v=uxJuuKH3SXI. However, not all of us are early birds and it was obvious who we are talking about. Still, breakfast was ready and everyone could just find a spot and grab something to eat.

The first training started with an amazing relay race as warm-up. Groups were formed based on the length of the skippers and both single rope and long rope were a part of the game. The kids liked it so much that they even added ten more minutes.

After the warmup, the skippers were split into two groups based on their age. The older skippers formed pairs and started practicing Chinese wheels. With examples and instructions from the rope skipping staff they had more than enough information to practice their skills. Moreover, they attached multiple pair wheels into a couple of 10 wheels. They all succeeded in jumping at least ten jumps in wheels. Great job everyone!

At the other side of the gym, music for the camp routine was playing. The age category 12 years and old were training for the show this this Friday. They did a really good job as well, most of them already know the first part of the routine.
Afterwards, the kids started the rope skipping challenge. Tessa, Pieter and Dagmar wrote down a couple of different rope skipping exercises which they had to complete within the agreed time frame. If they succeeded, they can give the staff an instruction to follow. But if they lose, it will be the other way around. Sadly enough the kids won… Which led to a postponement of their bed time. Lucky them..!

After lunch different activities were going on. Younger kids went of for swimming and the others stayed at the residence to make a lib dub. You probably think, what is a lib dub?? To keep it short and simpel: A lip dub is a type of music video that combines lip syncing and audio dubbing to make a music video. Lip dubs are usually done in a single unedited shot that often travel through different rooms and situations within a building. For our lip dub we used the song Cheap Trills by Sia. The results is quite nice! We will put it online after the camp. Exciting!

After dinner and a little bit of relaxing the older kids were able to walk a ghost tour. This year we have stretched a rope of plus minus 150 meters through the forest. Not only the dark was creepy, but also the fact that they were blinded! Imagine you have to follow a rope, through the forest, with your eyes covered and some weird people hanging around you. I know what I would have done…

Off to bed now! 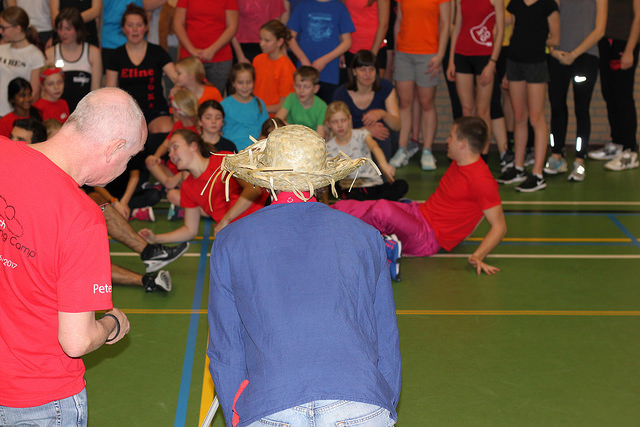 Already such a nice day at the farm

What a day! This morning only breakfast with the volunteers and now a total of 64 persons asleep. Wow…
Words describing today: shufflepuck, werewolves, stew and rope skipping!

The day started, after having breakfast, with a training session for all staff members. Beside talking about rope skipping they could also share cool skills and tricks. A nice way to learn some new stuff for them as well. Happens when you all share the same passion.

But before we knew, time was up and we had to go back to the residence to prepare the location for the participants. The chicken team (kitchen team) started with making coffee, tea and lemonade, the rope skipping bunnies moved some chairs and tables and the entertainment ducks were finishing the final details for the program. O, forgot about lunch… Somewhere between all work.

And then, the best part of today: the arrival of all skippers. It was so nice to see that there were so many returning participants! This is by far the best compliment an organisation can receive. We are honoured. But let’s not forget about the new ones, since we could not organize this dutch rope skipping camp without all of you.
The opening went smooth from that moment on. Everyone arrived before 14:30 and so we could started the official opening in time and introduce all volunteers. Nice, because the first training session was already at 15:30

After a nice walk in the fresh air, the skippers were able to start their training in Posterholt. In this first training the skippers and staff where challenged with the more regular disciplines in rope skipping namely: single rope and double dutch. Of course let’s not forget about the warm-up and cooling down.

Dinner was nice! I did not expect any different with such a wonderful chicken team. However, if the kids are keep eating like this, we should change plans and buy some more food for tomorrow. A good thing, if you’re asking me though!

“Lekker douche”, which means having a nice shower, echoed through the hallway while others were going to bed. Right now everybody is somewhere in their bedroom. Still, I am not using the word sleeping yet. Teenagers……